Wow… while writing this I had to pause here for a while. I didn’t realize the challenge I’ve been pwning all day is only this small! This is awesome! Where do you even begin…

Truth is Kileak had already done half of the work and I just wanted to document our method just because of the sheer amount of exploitation methods involved.

In short, we begin with getting an info leak by creating a bunch of different sized fastbin chunks (fastbin chunk <= 0x80 bytes with the metadata) followed by a request for a chunk of at least MIN_LARGE_SIZE+1 (0x400 bytes). By doing so we force the fastbin chunks to coalesce and eventually provide us with a leak. Then we create a new mmaped segment for our heap along with it’s new main_arena, we do this by requesting an enormous sized chunk.

By abusing the long size; as a pointer and char* buf as an index (always 0) we can write a NULL byte anywhere. In this case we overwrite the 2nd byte of new main_arena->top_ptr. Since the new main_arena and the new heap are on the same segment this will point the top_ptr right over the smallbins.

With unsorted bin attack we can attack the _IO_list_all and the vtable of the _IO_FILE stderr just as in House of Orange.

With the application running in a loop with malloc() followed by free() first it seems like impossible to get an info leak. But by abusing 2 facts we can achieve our goal.

Next, we create a new heap by requesting a huge chunk that would fail even mmap. Requesting a chunk bigger than the current top chunk and no free list can satisfy, malloc will call upon sysmalloc for extending the current heap. Sysmalloc will do a check if the request is bigger or equal than mp_.mmap_threshold (0x20000 bytes on my 64bit machine) sysmalloc will then call mmap. But if the size is too big even for mmap, the mmap will fail and brk syscall will be tried, and if this fails, _int_malloc will return 0. Then __libc_malloc will call arena_get_retry which it will call arena_get2 to fetch another arena (av) in it’s arena list. However since no arena’s but main_arena are currently present, arena_get2 will create a new arena with _int_new_arena => new_heap so __libc_malloc can try the allocation again with _int_malloc and the newly created arena. This of course will fail but it will result 2 things we are interested in.

Going back to the source now let’s exploit buf[size - 1] = 0;. How ? By requesting a size to match a target address which will result in the long size used as a char * and malloc returning 0 for buf as our index. This will write 0 at arbitrary address (in the new heap, the new heap because we can’t use the old heap anymore since it will not be used after the first time we use this vulnerability).

What is our write NULL byte target ? Well, thanks to Kileak’s ingenious thinking, we can overwrite the 2nd byte of the new arena->top which will cause the top chunk to point right over the smallbins of the mstate of the new arena (remember they share the same segment now).

After that, we can create a fake smallbin which points right on top of the mstate’s smallbins (almost on top of itself) so we can control all the metadata of it, but it’s actual size is of fastbin ! So after it’s allocated it will be freed and put into the fastbins. This way we create a fastbin for later allocations, which is very important because fastbin allocations are the fastest and will not mess with the mstate or any of the other bins.

When malloc keep track of chunks in the malloc state, malloc only handles the actual base of chunks it deals with, not the user returned buffer, and the sizes are always the actual full size of the chunk including the metadata. For example let’s see the unsorted bin. The chunk starts at 0x7fa17c000078 with it’s FD and BK pointers both pointing to it. And the numbers on the side are the size of the chunks being linked in that index. So, requesting a chunk of 0x100 bytes malloc will change the size to include metadata making it 0x110. The index for 0x110 is at 0x7fa17c000188 and 0x7fa17c000190, 0x7fa17c000188 being the address of it’s FD ptr and 0x7fa17c000190 being the address for it’s BK ptr. To check if a free chunk is present at that index malloc takes the BK ptr and checks if its not equal to the base address of that index’s base smallbin 0x7fa17c000178. 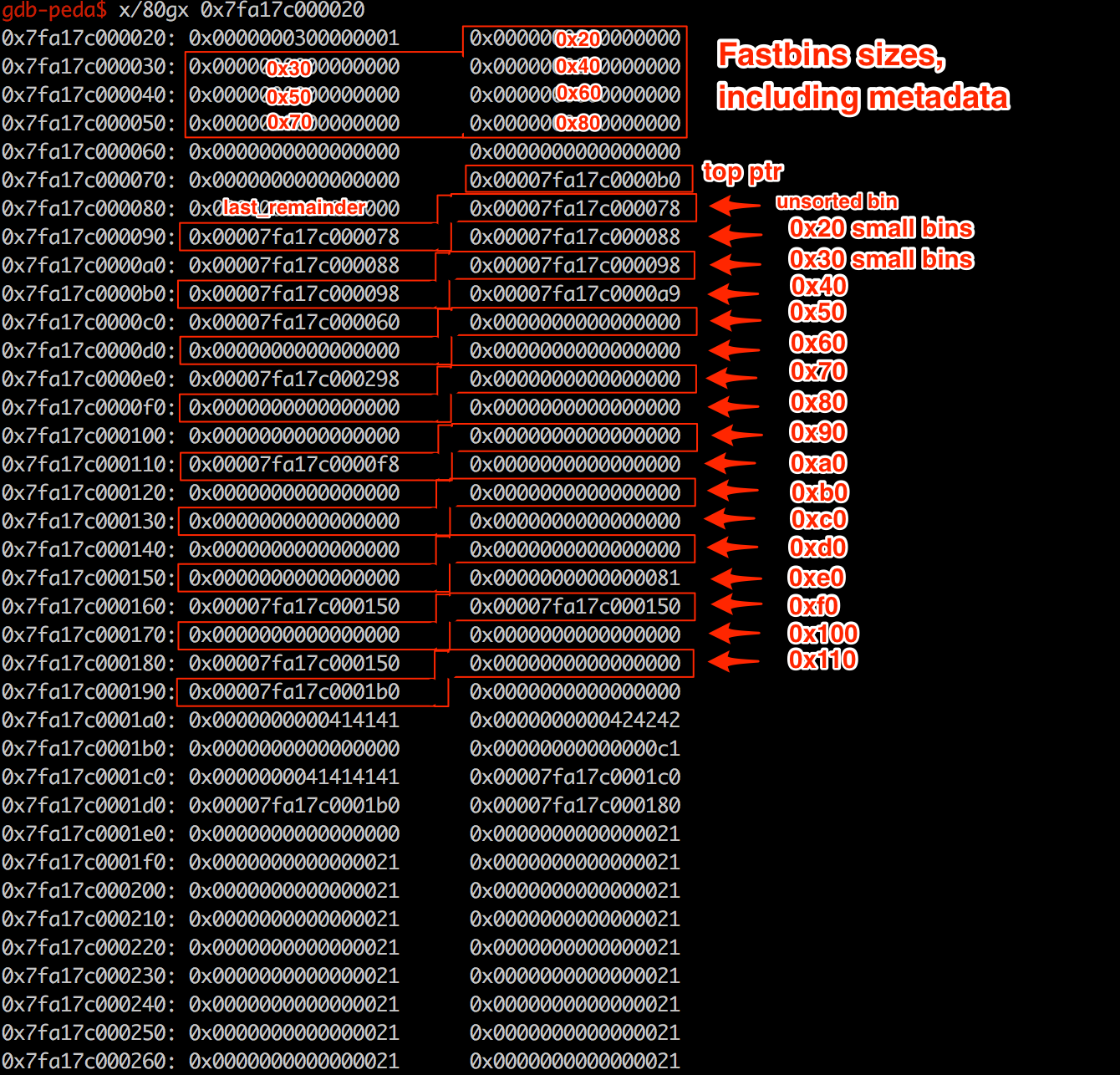 As you can see we have satisfied all conditions for the a requested 0x100 bytes to return 0x7fa17c0001c0 as our fake smallbin chunk. It’s size is 0xc0 which is going to place it in the unsorted bin as soon as it gets freed after the allocation.

We will do the same fake chunk but user request of size 0xf0 bytes. Looking at the corrupted data from the screenshot, can you tell what’s going to be the user returned buffer for that size ?

This chunk will be placed in the fastbins when freed because its size is of largest fastbin.

If you notice we have also set the PREV_IN_USE bit for both of our fake chunks so when freed there won’t be any backward consolidations. The forward consolidations are also taken care of thanks to all the array of 0x21 longs.

Here is the state of the heap after corruption (sorry for the different addresses, had to restart). 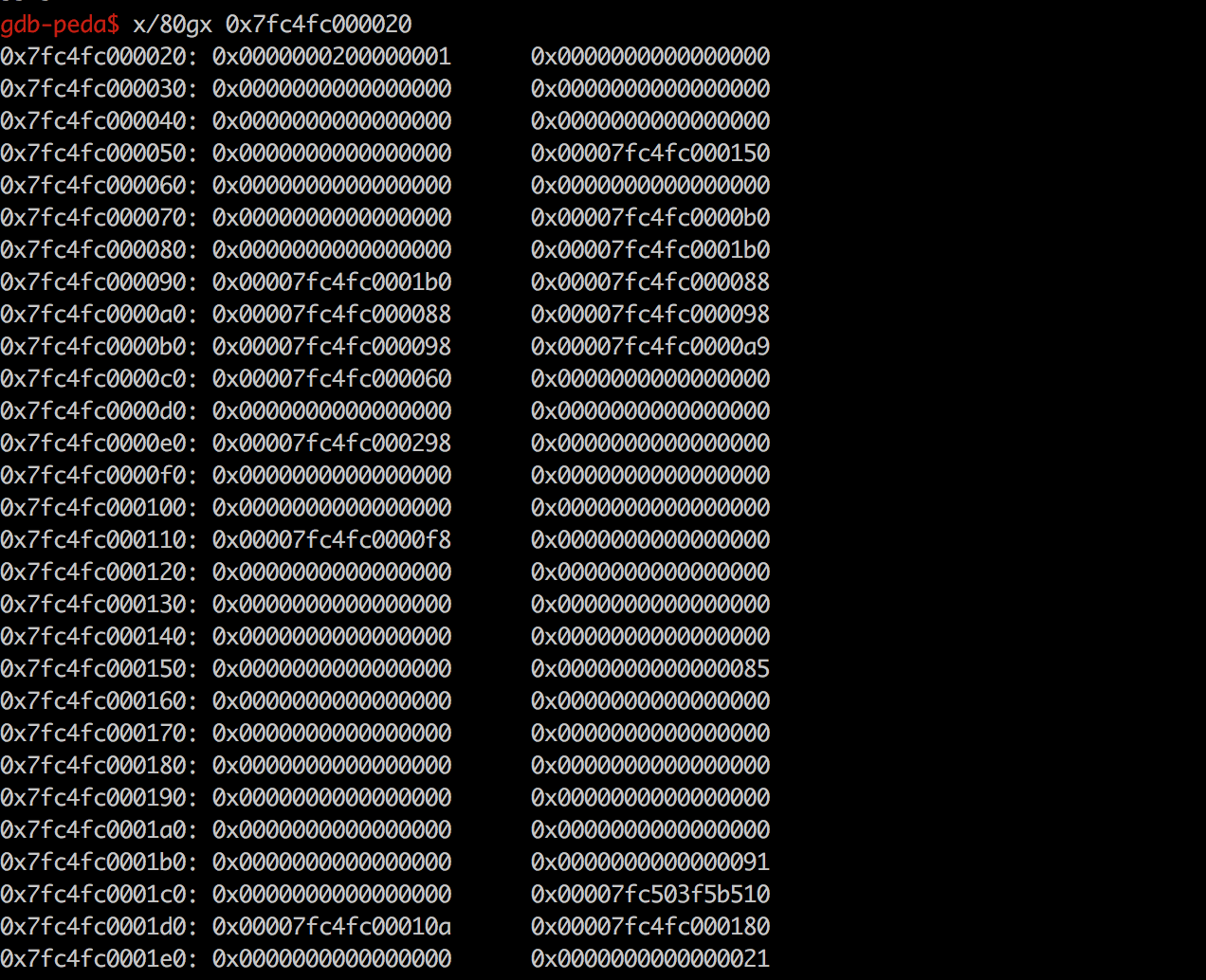 Let’s go ahead and verify the conditions for this write.

Next we need to skip the if branch for using the last_remainder.

We know that the second check fails… Now we can proceed and exploit the unsorted bin attack.

We are successfully out of malloc with our write objective completed. However a crash happens in _int_free right away because of the BK we corrupted.

But as described in the House of Orange we can still get a shell out of a crash. After all this is the reason we corrupted _IO_list_all.

To figure out how exactly, we will have to trace the call stack. When malloc/free fails with an error it will call on malloc_printerr => __libc_message => abort => fflush / _IO_flush_all_lockp => _IO_OVERFLOW (if requirements are satisfied)

Our goal is to reach the _IO_OVERFLOW which is a call to a pointer from the fp->_IO_jump_t->__overflow. You decide which OR condition you can satisfy.

Here are the important offsets