It’s-a me, Mario! We’re there. All I can see are turtle tracks. Whaddaya say we give Bowser the old Brooklyn one-two? hello-joe

If we start the binary, we see usage information. It takes the FLAG / password as command line argument.

When we look at the disassembly we see memcpy() being called several times in main() to copy chunks of data from the Data Section to the Stack Section.

Little after that we see a random chunk being called and executed from the stack. 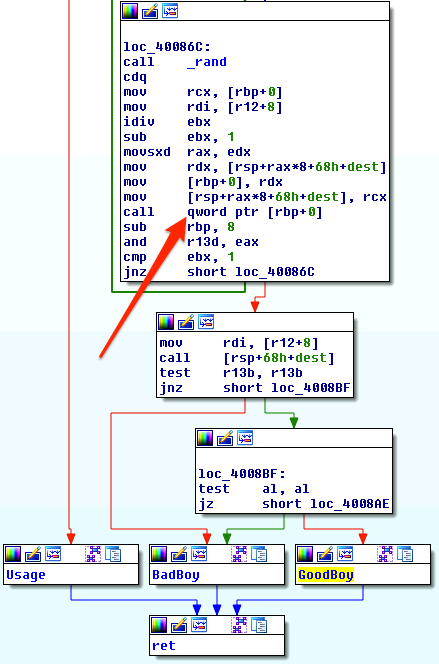 What happens here is data from /dev/urandom is used as seed for rand(), followed by with modulo 6 to determine which of the previously copied chunks of data is going to be executed. Each of those chunks are individual flag checking functions. Because it will take too long to step through all 6 of the functions I will just give you an example snippet of how they check for right flag. Each function checks a specific index character from our input against 3 valid characters like so:

To hinder our analysis there were anti-stepping instruction after each character check/skip using the following method:

Instruction ‘rdtsc’ returns CPU time-stamp counter, which is being checked if it ends with 0xfffff, if not it jumps back 9 bytes making it infinite loop. As we single-step our chances of hitting 0xfffff are probably less than winning the lotto :). So for the most part I just used static analysis by converting the functions in the Data Segment to executable code.

Overall it was a fun challenge. My thanks to the guys from 9447.